In this second week of Advent the figure of John, the wild man of the Judean desert appears. The desert is a wild, barren and inhospitable landscape, barely tolerating human habitation. Yet, worldwide, over 300 million people live in deserts. Much of the day of a desert inhabitant is spent searching for water. Finding a water source is an occasion of great joy. No wonder, then, that images and metaphors drawn from the desert experience have shaped our religious imagination over the centuries. Islam itself emerged from a desert experience. So, too, at different points in the history of spirituality prophets and people of wisdom have spoken to us out of a desert period in their lives.

This past week I have been spending time with Desert People, two in particular: Charles de Foucauld and Christian de Chergé. Both are French and both are within touching distance of our modern era. Both had served in the French military in North Africa and both had come to know not only the desert Atlas mountain region but also the people who lived there, most of them Muslim. 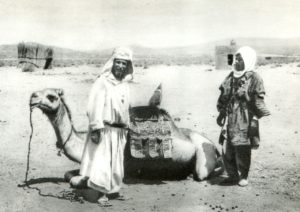 Charles de Foucauld, as a young military officer leading a mission in the deep desert of Morocco, was befriended by a Tuareg tribesman, a Muslim. The Muslim left a deep impression on Charles. For the first time in his life Charles met a human being whose life was transformed by prayer, compassion and the desert. This encounter was a game-changer for Charles. He drank deeply from the well of his own inner frustrations, his dissatisfaction with life, his failure to find love, his disillusionment with the French colonial enterprise and, above all, his profound interior loneliness. The desert changed him. He went on to become a monk living the solitude of the desert with the Tuareg, calling them his brothers. The place was Tamanrasset. This very week one hundred years ago, however, he himself fell victim to the hatred spawned by Western colonial oppression.

The second person, Christian de Chergé, a Cistercian monk whose life parallels that of Charles de Foucauld in many ways spent most of his life in the Monastery of Our Lady of the Atlas in the Algerian mountain village of Tibherine. 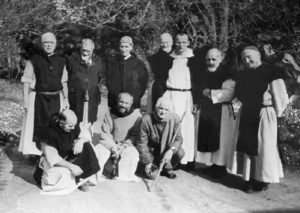 In 1996 he was killed, it is suspected, by the Islamic militia, the GIA (Groupe Islamiste Armé), an Islamist movement in conflict with the Algerian government. In a moving testimony which he wrote a few years before his death he had written of his love for Algeria, for the people of Algeria and of how much he owed to his encounter with the spirituality of the Muslim people with whom he shared his life. Much of his story has been documented in the 2010 film, Of Gods and Men.

Our Growing Fear of the Other

Today, in our world, we have become fearful of the other, of the stranger among us. We are retreating to the confines of what we believe to be the safe world of our local and national identities. Across Europe and elsewhere we are intent on strengthening our national borders against perceived threats from elsewhere.

Even here in Ireland we are secretly pleased that our record in deporting failed asylum seekers is one of the best in Europe. And we admit far fewer refugees than almost any other country in Europe. Were John the Baptist to arrive at our doorstep today we would almost certainly call the police to have him deported as a suspect foreign national.

It is only a year since Aylan Kurdi was washed up on a Greek beach and already the surge of compassion that inspired Angela Merkel to welcome one million refugees appears to have leached into the sands of fear.

Let us, this Advent, try to live out the words of Saint Paul in the Letter to Romans in the liturgy of the Second Sunday of Advent: “Welcome one another, then, as Christ welcomed you, for the glory of God.” Never was a biblical message more relevant than this for the times in which we live.

May this be our grace this Advent.

Take Time Out for a little Meditation

The BBC Music magazine December 2016 edition features on its cover the choral composer Eric Whitacre. He broke new ground with his Virtual Choir which in 2013 assembled hundreds of people across the world into a choir which he conducted online. On that occasion they sang his now celebrated piece Lux Aurumque.

For a meditative few moments enjoy his beautiful Enjoy the Silence, a tribute to Depeche Mode‘s track of the same name. In this video, the music is set to images and 3D simulations based on the Hubble telescope images which have inspired much of Whitacre’s work. Of these images Whitacre has said that they inspire an awe and wonder which is close to what he understands tp be akin to religious faith. He himself remains agnostic. He has a particular appreciation of the religious music tradition represented by Gregorian chant.